I know, I know; the Kony 2012 subject has been done to death. I don’t plan to weigh-in too heavily on the debate, except to make a small comment on what the media has termed “clicktivism”. Or indeed what sceptics have termed “slacktivism”.

Before I go on: my viewpoint on the campaign. Naturally it goes without saying that a Brit such as myself sees the “Stop Kony” campaign – or rather the more bizarrely named “Kony 2012” (more akin to a Presidential election campaign title, right?) – with a healthy dose of scepticism. I wouldn’t go as far as Charlie Brooker did in likening it to a cult, after all Kony is not a myth and his well-known LRA has been in operation for almost 2 decades, throughout which time numerous atrocities have been reported by the international media.

No, Charlie Brooker’s attack on the campaign was in itself egotistical, and attempting to make comedic capital out of the systematic rape and murder of kidnapped children by a man whose arrest warrant was issued by the ICC a decade ago is unfathomably stupid and shallow.

Satire should be relevant; as such Brooker might have focussed on the core debate which includes the organisation’s transparency, immediate fame, and efficacy. A little side-poke at the ‘cultish’ nature of the campaign might have been more palatable in this case.

Back to the matter in hand: “clicktivism” or “slacktivism”.

Although, in themselves, these terms are cringeworthy, they point towards a social phenomenon unique to the new Twitter/Facebook generation. That is, the belief that fame in itself can solve problems.

Over the last few days on social media, I’ve seen examples of this;

Whilst the first is obviously a clear case of today’s obsession with celebrity over that of talent, the second is worthy of a little more debate.

I’m in two minds about the effect of fame on politics and international law. On the one hand I lament the fact that charities like Oxfam and Amnesty have been chipping away at this campaign for decades, and one single-issue movement gathers pace, produces a glitzy video, and blows their attempts on the given issue out of the water by engaging young people.

On the other hand, is this not just the new form of political campaign? Throughout the history of representative democracy, politics has been about issues and people gathering fame, whether this involved those on the campaign trail knocking on doors and delivering leaflets, or more recently making glamorous videos. Was not the Obama ’08 campaign the blueprint for the latter?

Head of Research at Oxfam UK, Duncan Green, blogs with scepticism about the issues of fame and charity. Whilst he makes some valid points about the absorption rate of human rights issues into the minds of young people, I can’t help feeling that his response focusses mainly on the style of the campaign rather than the effect it might have. He is “appalled” by the tone, the depiction of Africa, and the “feelgood schmaltz”. Whilst I don’t personally like these aspects of the Kony 2012 campaign, these are the very things that made it successful, and brought 60 million viewers to the cause. They are mere stylistic objections.

In summary, whilst I want to dislike the whole focus on glamour, the Invisible Children published a thorough response to current criticism of their campaign, detailing their breakdown of expenditure. 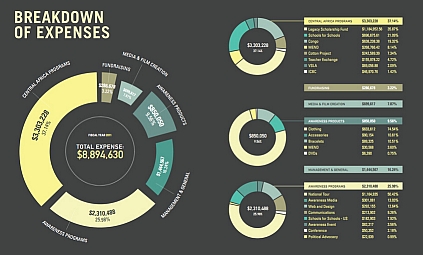 If the pie chart tells a truthful story, then I’m all in favour of how they are spending their money and running their ads.

Those who want charities to remain chipping away quietly at issues of human injustice rather than making grand statements that engage young people may have to start rethinking their position, because global, single-issue movements will play an increasing part in the future of charitable giving.