Little demo video of the project so far below!

My idea for a room control panel came about after seeing the vastly expensive options on the market, and because we are building a new home! 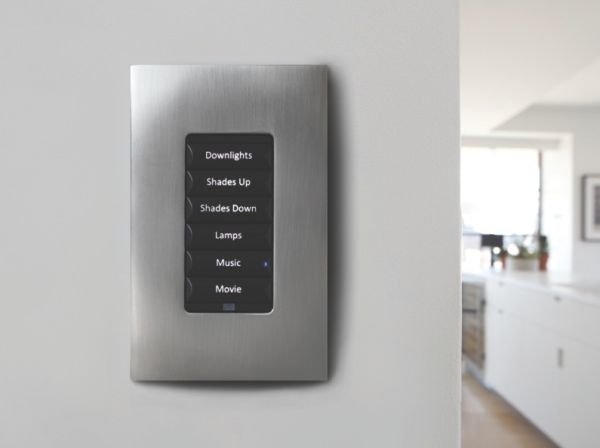 Lovely! But I can do *far* better, right?

I love the brushed stainless steel precision-cut panels they offer – so I plan to make my own.

Not only are the options available a little* over budget, more importantly they don’t come close to addressing my ideals:

The audio control aspect is particularly close to my heart:

You’ll see I have shunned wireless communications and touchscreen control devices. Whilst they might seem sexier, to me nothing beats the reliability of cables and the hard, fast, robustness of a physical knob. Especially when we are controlling digital devices, it’s so hard to get that lovely “feel” when turning things up and down, but we must try!

(Also I have a huge surplus of CAT6 cable 🙂

My budget includes laser cutting some screwless faceplates, and even with this custom work, it’s looking very likely it will still be around 5-10 times cheaper than anything else I’ve seen… and SO much better.

Check out my progress so far!

In this video I’m perhaps unfairly harsh about OpenHAB and provide no detailed information about MQTT, but I’ve spent a great deal of time assessing OpenHAB vs. alternatives like Domoticz, and I’m sold. I believe it will become the glue that will hold the increasingly disparate world of automation together. It provides persistence, data access layers, and a binding for pretty much any automation device or system you care to think of.

It’s true that OpenHAB is daunting for the non-coder, but v2 is set to address these problems. Most importantly for me, OpenHAB has an advanced rule engine and a lovely array of software control interfaces.

MQTT as a transport protocol is a winner; HTTP is clearly not appropriate for sensor networks and REST is for sleeping. I may post about MQTT in more detail later but I’m really satisfied by how sophisticated and simple it is, and I find it highly intuitive. I like the mindset behind MQTT which you can read about here.

A world of home automation opening up

So I became pretty obsessed with home automation. You know, the type where your home detects you walked through the door, turns the lights on, and says through the speakers, “Hello Mat, did you have a nice day?”

Actually the above, whilst it sounds a bit sci-fi, is something I already tested out in my home to great success. My home automation system can now speak to me and tell me things. It’s a fine line tweaking it to only communicate useful things, such as “I see you are getting ready to go out, don’t forget your kitchen window is open”, but it’s important that the automation system doesn’t become a gimmick. For example, and this is something I tested, using a combination of cheap wireless sensors in different rooms allows me to write rules: bedroom door shut, lights off, bathroom detects movement, front door opens, BANG – he is leaving the house. Automatically check windows and if any are left open then speak a message through the home network audio system using Google’s voice servers. Then send a notification to my iPhone.

Sounds far too neat to be true, but it works a treat, and reliably too. It really is “set and forget” once you get the rules right.

Whilst I ditched the “hello Mat” bit spoken through the speakers (it got annoying after a while), you must agree the hallway lights coming on when you enter the home is a rather warm and lovely thing you might want to keep.

Using a combination of cheap and free bits of tech, it’s rather easy to do this*.

First of all you need to replace your lightswitches with the lovely RF controlled dimmer types available from manufacturers such as Z-Wave / Fibaro, or closer to home, an English company called LightwaveRF who make very cheap multi-way multi-gang dimmer switches that pair with controllers also manufactured by LightwaveRF. These were until recently found in B&Q, I think stock may come back shortly. After playing with those for a while you can stop using the LightwaveRF handheld radio remotes (they are radio, not infrared. That means they work anywhere in the house), lovely as they are, and for £80 buy an RFXtrx which is a little USB device you plug into your laptop or server or Raspberry Pi and it transmits and receives signals and talks to your lights.

Now hook the RFX with a computer running one of the excellent open source automation products, all free of course, and hey presto – you can now control your lights from the nearby park from your iPhone! One-touch access to moods, scenarios, dimmer sliders, you name it.

A lightswitch is an “actuator”. LightwaveRF – and many others – also sell “sensors”, such as PIRs to detect movement in a room, or door sensors, which feed into the system too.

Many home automation products – the one I have settled on is called OpenHab – allow you to integrate with a number of systems you might already own. Network home audio? You bet! OpenHab has a binding for Sonos and Squeezebox. They integrate with Google Voice. No extra cost and only a bit of extra playing to get it working. The world of opportunities now opens up – you can now control your music AND your lights from your light switches…

Actually it turns out that of course the LightwaveRF switches only receive signals, they don’t send them out. They ship with remote controls that can be re-purposed for controlling your volume and play / stop etc., but the lightswitches themselves will clearly need upgrading to the more expensive Z-Wave RF types which have 2-way communications in order to do such a thing. Well I don’t plan to do that because I’m a cheapskate, and more importantly I love the challenge of building my own room audio controller. This gives me a chance to integrate a pretty flush-mount digital display into my walls showing the current playlist.