There was a time when my home server was a large computer with RAID drives and loud fans that stayed on 24/7. Gladly that time is no longer, and I’ve moved to a more power-friendly netbook-based thing which generates hardly any heat and can therefore be left in a small cupboard without airflow concerns. The disk performance is, naturally, horrific, but it serves files up fast enough for me to stream music around the house.

I now do pretty much all my photo editing work on my laptop, which I take around with me.

As I still have the requirement for archiving large volumes of data to the desktop PC with hardware mirrored drives, unfortunately this machine has to stay. But I can keep it turned-off for 95% of the time, and only turn it on to copy / archive my data to it when needed. As well as saving energy, this should increase the lifespan of my disks by a long way too.

My netbook also acts as a web server from which I am hosting a simple ASP.net application to send WOL (wake on LAN) magic packets to my desktop PC. This is secured using Basic Authentication over SSL. It is therefore now possible for me to securely start my computer up when I’m away from home, then log on remotely using RDP (or establish a VPN connection). However – this is unrelated to my post.

I tend to do the large file transfers when at home, and given the regularity of these transfers, I’ve set up a directory on my main laptop into which I can dump everything ready for transferring, then run a robocopy batch file to move this data across.

Cue: “Amazing Robocopy“. (This is a super batch file which runs the robocopy routine and does a load more. I may have wasted an entire evening writing this batch file.) Hopefully the above gives you the context you need to fully appreciate why I need such a thing.

“Amazing Robocopy” does the following:

The screencap says it all: 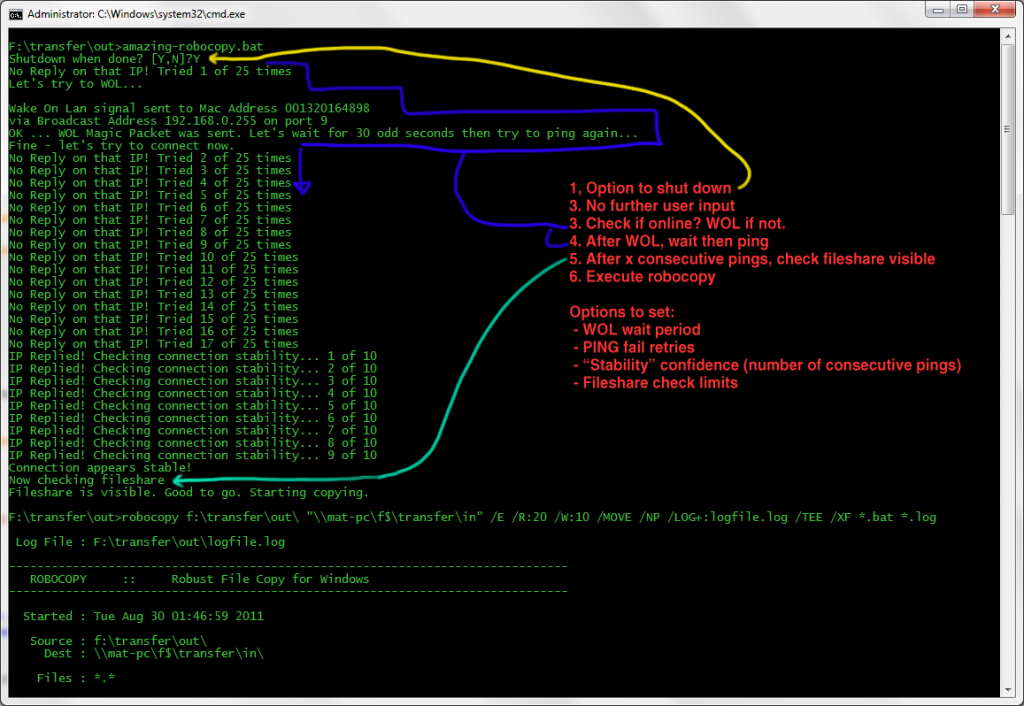 It may be best to paste this into notepad before attempting to read.

Notes: download Depicus Wake On LAN for command line, and put it somewhere in your PATH. You’ll need to set the WOL arguments manually, as they can’t be configured with variables.

Also you’ll need to set the robocopy parameters to suit you.